Are you (b) ready to be gluten-free? 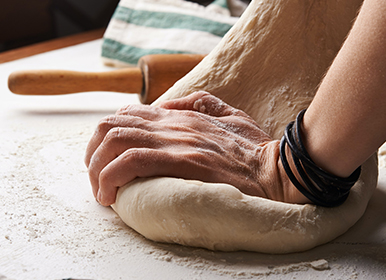 Ditching gluten might help you cut the bloat, banish bad skin and even ease that recurrent migraine

“Is this gluten-free?” often pushes me over the edge. Not because I hate people being responsible about what they eat, but because it’s unfathomable to me how a dietary restriction became a trend.

A decade or so ago, we found ‘gluten-free’ competing to dethrone organic food as the new cool kid on the wellness block. Gluten became a  buzz word on social media , gluten-free foods got their very own aisles in supermarkets, and the fad even caused quite a stir in the fashion world when Zara launched (and later discontinued)  t-shirts  with “Are you gluten free?” plastered across it. But why the sudden surge in the number of people being diagnosed as gluten intolerant?

“Gluten that we consume today is not the same as the gluten our grandparents were consuming.
Its genetic composition has been modified, due to industrialisation. And this evolution has become a common cause for intolerances, allergies or sensitivities,” says Janvi Chitalia, integrative gut microbiome health coach and founder of  Body Cocoon . This processing has caused the number of
chromosomes found in gluten’s genetic make-up to almost triple in number, causing our systems to react differently to it over time.

One out of every hundred  people are either allergic to gluten or gluten intolerant, which means that about two to three people on your flight from Mumbai to Goa really shouldn’t be scarfing down the complementary croissants.
Before you start writing heartfelt farewell notes to all your beloved baked goods, scroll down to find answers to all the questions that have sprung up in your head in the last 15 seconds, barring “Why meeeee???”.

What even is gluten?

Gluten is a protein found in wheat, barley, spelt, rye and many other grains.
Gluten has glue-like properties that provide elasticity to the dough you make, using these grains. It is the reason why you can stretch a ball of dough to form a round roti (yes, unlike unicorns, round rotis do actually exist) without it tearing.

Gluten is found in grains and also in seasonings, sauces, soups, and canned or processed foods.
Don’t ever forget to read the label.

“Awareness is your biggest ally in dealing with intolerances,” says Chitalia, explaining that it’s important to distinguish between different conditions to get the right treatment.

Gluten intolerance is more of an umbrella term that is often used (but shouldn’t be) to refer to three different conditions.

Celiac disease: This is a severe form of gluten intolerance that has symptoms like cramping, diarrhoea, and motion urgency that show up fairly quickly. Celiac disease can also prevent the absorption of nutrients and in severe cases cause malnutrition.
“Consuming gluten if you have celiac disease can damage the intestines,” explains Chitalia. Your genetic make-up determines how susceptible you are to the disease, and it’s best to see a doctor for treatment.

Non-celiac gluten sensitivity (NCGS): This is a milder version of gluten intolerance that does not require emergency care.
The symptoms are similar to those of celiac disease. In addition, a person suffering from NCGS is more likely to experience gas, bloating, stomach ache, headaches, anxiety, lethargy, mental fatigue, and brain fog. Also, these symptoms may surface even as late as about three to five hours
after consuming gluten.
And even though NCGS is often referred to as a milder version of celiac disease, everyone’s threshold for discomfort varies. “When symptoms arise, it’s best to consult an expert, as in case of celiac disease, late diagnosis can cause physiological damage,” explains Chitalia.

Wheat allergy: Commonly referred to as gluten allergy, it can send the patient into anaphylactic shock.

The main difference between gluten intolerance and gluten allergy is that an intolerance will usually surface in the form of digestion-related complications, while symptoms for allergy include severe cases of migraines, diarrhoea, rashes like hives and anxiety, which need immediate attention.

A major distinguishing factor is that an allergy attacks the respiratory system, leading to wheezing, breathlessness, and in some cases, swelling of the face – symptoms that are not linked to intolerance. In cases of wheat allergy, a course of treatment must be prescribed by a doctor.
The reaction caused due to a wheat allergy can be almost immediate — within fifteen minutes to an hour.

How do I combat symptoms?
Chitalia suggests you adopt a five-step protocol to combat any of the three conditions – remove, replace, re-inoculate, repair and rebalance.

Remove: The first step of the gut healing process or five-step protocol is to remove the triggers that irritate the immune system. Irritants cause further inflammation and do not let the gut heal.
“Completely avoid gluten for two to four weeks. This is called the elimination diet,” advises Chitalia.
Replace: Replace the nutrients eaten in regular food with nutrients which cause the replenishment of the gut cells for microbial balance. If you’re eliminating gluten, incorporate more prebiotics in your diet.
Re-inoculate: Once the terrain of the gut is ready to heal, reintroduce the gut to good bacteria or probiotics to prevent  dysbiosis  (occurs when the bacteria in your gastrointestinal (GI) tract become unbalanced). Eating fermented foods such as kefir, sauerkraut, kombucha tea, kimchi or miso can
help you do that.
Repair: The gut lining needs to be repaired to prevent intestinal permeability, that essentially means preventing bacteria and toxins from passing from the gut to the blood stream. Consuming glutamine, bone broth or collagen can help with gut repair.
Rebalance:  This involves slowly reintroducing the offending food to test the immune response.
Always consult a doctor before doing this. Be extra careful if you are suffering from celiac disease because in this case, gluten intake is completely banned.

What are some gluten-free substitutes that are safe to include in my diet?
Atta and maida are every Indian kitchen’s staples, so eliminating them from your diet means bye-bye bhatura and other comfort foods you turn to after watching a tear-jerker that left you feeling vulnerable. Rye, barley, spelt, and kamut are also no longer an option.
“Bajra, jowar, nachni, buckwheat, rajgeera, quinoa, brown and red rice, millets, pulses, fruits and vegetables are food groups you can still consume,” explains Chitalia. Breathe, you still have hope.

Why do people usually eliminate dairy from their diets when they have gluten-related conditions?
It’s simply a case of mistaken identity. Dairy is known to have a similar protein molecular structure as gluten, which often leads to the immune system getting aggravated and subsequently causing inflammation. The immune system confuses dairy for gluten. For people with increased sensitivity, it’s best to maintain low or no dairy intake and switch over to  dairy-free substitutes .
Another food group that might not instantly come to mind when striking off gluten-rich food items is oats. Oats are often processed or milled at a facility where wheat or barley or rye are processed, leading to high probability of “cross reactivity contamination,” which can be dangerous for a person who has celiac disease or gluten or wheat allergy. When consuming oats, keep your eyes open for any symptoms that might surface.

Can cutting out gluten from my diet lead to any nutritional deficiencies?
Wheat covers 70% to 75% of our prebiotic intake. Prebiotics are like food for gut microbes or probiotics in our intestines. And  probiotics are essential to help maintain gut balance . Onions, garlic, plantain, and chicory root are some foods you can include in your gluten-free diet to ensure
that you are consuming the adequate amount of prebiotics.